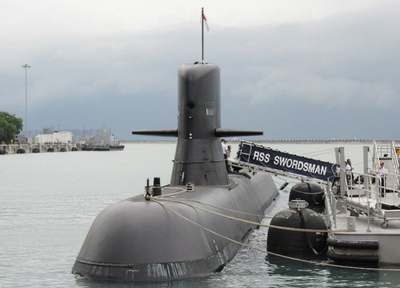 The Republic of Singapore Navy's (RSN)  Archer-class submarine, RSS Swordsman, has arrived at Changi Naval Base (CNB) from Sweden. Chief of Navy, Rear-Admiral Ng Chee Peng, and other senior naval officers were present at CNB to witness its return.

Launched in Karlskrona, Sweden, on 20 October 2010, RSS Swordsman is one of two ex-Royal Swedish Navy Västergötland-class submarines that Singapore acquired in 2005. Similar to RSS Archer, the RSN's first Archer-class submarine, RSS Swordsman has been comprehensively upgraded, refurbished and tropicalised to ensure its suitability for operations in local conditions.

The crew of RSS Swordsman has also undergone extensive training in Sweden since 2008 to acquire the skill sets needed to operate and maintain the submarine.

The submarine will join 171 Squadron, under the RSN's Fleet Command, to enhance the RSN's capability in securing the seaward defence of Singapore and protect its vital sea lines of communication.