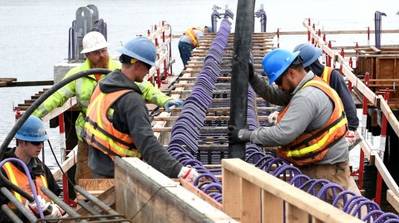 Managing members of the Northwest Seaport Alliance have approved a $52 million purchase of four more container cranes to join four others already on order for Husky Terminal in the South Harbor in Tacoma.
They also approved an additional $2.9 million in improvements at Seattle’s Terminal 18 in the North Harbor and Tacoma’s West Hylebos Log Yard and Pierce County Terminal in the South Harbor.
“As the alliance, we can invest holistically in our facilities to ensure they remain competitive in this fast-changing industry,” said Dick Marzano, co-chair of The Northwest Seaport Alliance. “These improvements will help us serve our customers better and continue to create the trade-related jobs so vital to our state.”
"These investments in Terminal 18 continue to make this one of our best cargo-handling assets for the NWSA," said Port of Seattle Commissioner Stephanie Bowman. "These world-class terminals continue to provide family-wage jobs for our entire region."
The new cranes, to be built by Shanghai Zhenhua Heavy Industry Co., Ltd. (ZPMC) in China, will be capable of serving ultra-large container vessels with an outreach of 24 containers and a lift height of 165 feet above the pier deck.
Construction is underway at Husky Terminal to reconstruct Pier 4 to align it with Pier 3, creating a contiguous 2,960-foot berth. These improvements will allow two 18,000-TEU ships to dock at the same time.
The reconstructed berth will also include conduit for future shore power to allow ships to plug into electricity while at dock.
Construction and the first four cranes are estimated to be done in 2018. The four additional cranes will arrive in 2019.
The additional improvements will enhance log yard and Terminal 18 docks and a building at Pierce County Terminal.
Future Terminal 5 improvements in the North Harbor also are under design.
• Husky Terminal • Northwest Seaport Alliance • Pierce County

​Water Drone Christened in the Port of Hamburg