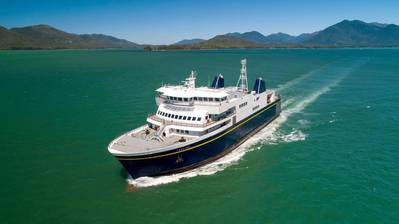 The Tazlina, one of many Alaska Marine Highway System ferries idled - greatly inconveniencing the general public - by the nine-day labor strike; one which was characterized as 'illegal' by Governor Mike Dunleavy's administration. Image: Vigor / State of Alaska

Contract negotiators between striking Alaska ferry boat workers and state officials have reached a tentative deal to end a 9-day-old walkout that has shut down the state Maritime Highway System, a federal mediator said on Friday.

About 420 members of the Inlandboatmen's Union of the Pacific (IBU) walked off the job on July 24, idling a ferry network that serves more than 30 coastal and island communities statewide. It was the first strike against the Alaska Maritime Highway System in 42 years.

The Federal Mediation and Conciliation Service, which reconvened contract bargaining after talks broke down on the eve of the strike, said the parties reached an agreement late on Thursday, and that the walkout was "effectively over."

"The parties worked around the clock in mediated negotiations over the last week to reach this settlement," Beth Schindler, the Seattle-based commissioner and regional director of the Mediation and Conciliation Service, said in a statement.

Union leaders have said they called the strike after contract negotiations that had dragged on with state officials for three years reached a deadlock. The IBU's previous three-year labor accord expired in mid-2017.

The striking workers also were protesting deep budget cuts imposed on the ferry system by Governor Mike Dunleavy, who has pushed to suspend all ferry service for several months over the winter in some areas in order to cut costs.