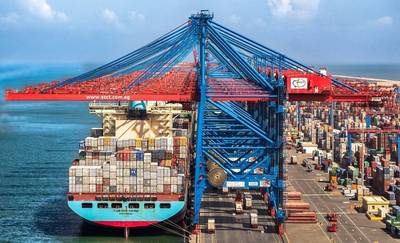 The international container terminal operating company headquartered in The Hague, APM Terminals said that it is working closely with the government of Egypt on the final pieces of the jigsaw that will ensure the success of Egypt Vision 2030 for Port Said East Port and the Suez Canal Container Terminal (SCCT).

Once in place, it is set to regain its position as one of the most competitive ports in the South and East Mediterranean region, APM said in a press release.

As part of Egypt Vision 2030, the Egyptian Government has made massive investments in infrastructure. On May 5, 2019, Egypt’s President, Mr. Abdel Fattah Al-Sisi inaugurated the Ismailia tunnel, which will ease the flow of traffic and cargo from and to the Sinai Peninsula.

The tunnel significantly improves connectivity between SCCT and key industrial zones in Greater Cairo. A second tunnel connecting Port Said is scheduled to open this summer.

The Ismailia tunnel, which runs under the Suez Canal, is the largest of its kind and has the capacity to handle 2,000 vehicles per hour in each direction.

The entrances to the tunnel, in both directions, are equipped with 10 scanners to scan vehicles and trailers entering the tunnel. They have the capacity of scanning up to 250 vehicles per hour. Six of these 10 lanes will be completely dedicated to trucks and trailers.

A new six-lane highway also links SCCT’s location on the Sinai Peninsula with key metropolitan areas in the western part of the country.

The tunnel is expected to quickly ramp up to full operational mode. This will significantly improve truck journey times between Greater Cairo and SCCT, which are currently between two and three days, and reduce cost for the end customer.

“It is the first time we have seen this quality of roads and tunnels in this part of the world. Together with improved security around the port it's truly an achievement of the highest international standard for Egypt,” says SCCT’s CEO, Lars Vang Christensen. “This new development will make SCCT the primary gateway for cargo in and out of Egypt.”