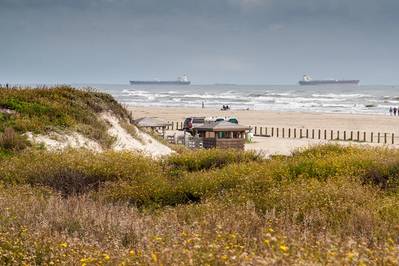 The ports of Houston, Galveston, Freeport and Texas City in Texas on Wednesday lifted the "yankee" status they had set ahead of Hurricane Nicholas, which made landfall on Monday, allowing the resumption of inbound vessel traffic, the U.S. Coast Guard said.

Nicholas passed through the Texas coast on Tuesday on its way to Louisiana, causing minor floods and leaving over 400,000 customers without power. But electricity providers had restored service to almost three-quarters of the houses and businesses affected by Wednesday.

Freeport was one of the areas hit by the power outages after Nicholas made landfall as a Category 1 hurricane on the Matagorda Peninsula in Texas, also forcing the temporary shutdown of several crude and fuel pipelines.

At the Port of Houston, which resumed normal operations at its eight terminals early on Wednesday, about 20 vessels remained to transit inbound and three vessels were scheduled for departure, according to a shipping report seen by Reuters.

Some oil tankers set to load crude for exports in September at Louisiana ports were diverted to Texas ports, where delays from Nicholas have added to demurrage coming from the previous storm, Hurricane Ida.

"Yankee" is a condition in which ports are closed to all inbound commercial traffic unless authorized by the captain of the port.