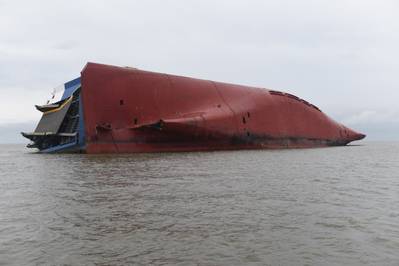 The record low 41 large shipping losses worldwide in 2019 represents a 20% improvement year-on-year and almost 70% over a decade, but the coronavirus crisis could endanger the long-term safety improvements in the shipping industry for 2020 and beyond, as difficult operating conditions and a sharp economic downturn present a unique set of challenges, according to recent report from marine insurer Allianz Global Corporate & Specialty (AGCS).

“Coronavirus has struck at a difficult time for the maritime industry as it seeks to reduce its emissions, navigates issues such as climate change, political risks and piracy, and deals with ongoing problems such as fires on vessels,” says Baptiste Ossena, Global Product Leader Hull Insurance, AGCS. “Now the sector also faces the task of operating in a very different world with the uncertain public health and economic implications of the pandemic.”

In 2019, 41 total losses of vessels were reported around the world, down from 53 one year earlier. This represents an approximate 70% decline over 10 years and is a result of sustained efforts in the areas of regulation, training and technological advancement, among others. More than 950 shipping losses have been reported since the start of 2010. 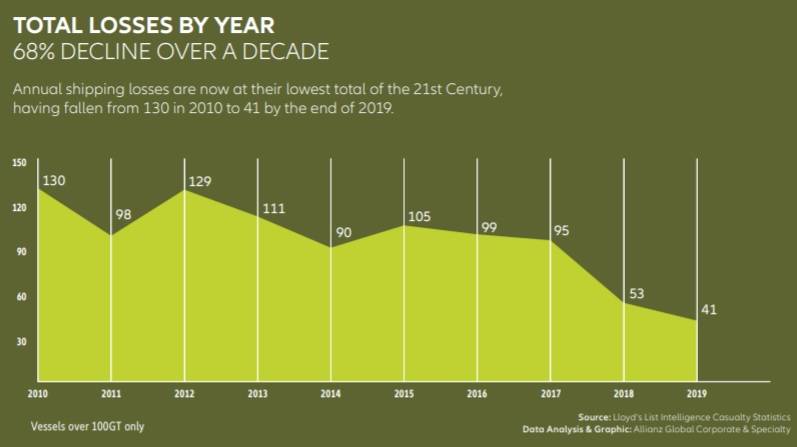 The shipping industry has continued to operate through the pandemic, despite disruption at ports and to crew changes. While any reduction in sailings due to coronavirus restrictions could see loss activity fall in the interim, the report highlights challenges that could heighten risks. Among these are:

“Shipowners also face additional cost pressures from a downturn in the economy and trade,” says Captain Rahul Khanna, Global Head of Marine Risk Consulting at AGCS. “We know from past downturns that crew and maintenance budgets are among the first areas that can be cut and this can impact the safe operations of vessels and machinery, potentially causing damage or breakdown, which in turn can lead to groundings or collisions. It is crucial that safety and maintenance standards are not impacted by any downturn.”

According to the report, the South China, Indochina, Indonesia and Philippines maritime region remains the top loss location with 12 vessels in 2019 and 228 vessels over the past decade – one in four of all losses. High levels of trade, busy shipping lanes, older fleets, typhoon exposure and safety issues on some domestic ferry routes are contributing factors. However, in 2019, losses declined for the second successive year. The Gulf of Mexico (four) and the West African Coast (three) rank second and third.

Cargo ships (15) accounted for more than a third of vessels lost in the past year, while foundered (sunk/submerged) was the main cause of all total losses, accounting for three in four (31). Bad weather accounted for one in five losses. Issues with car carriers and roll-on/roll-off (ro-ro) vessels remain among the biggest safety issues. Total losses involving ro-ros are up year-on-year, as well as smaller incidents (up by 20%) – a trend continuing through 2020. 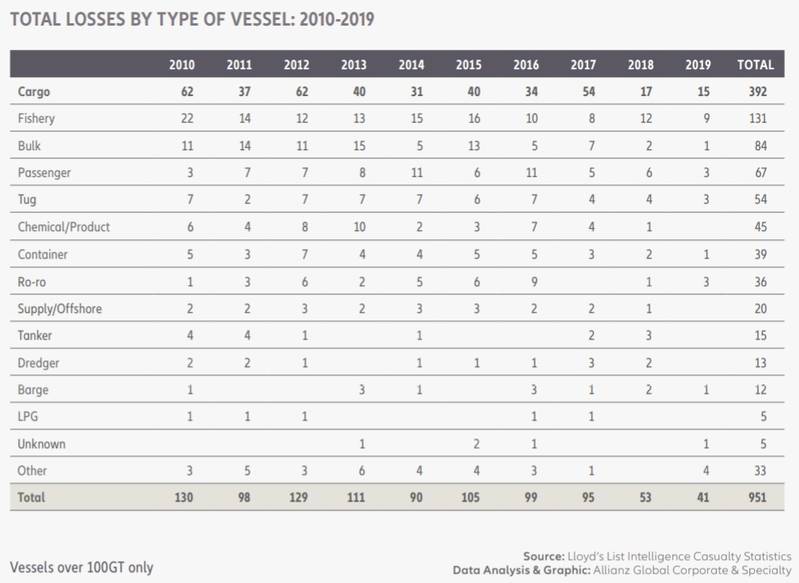 While total losses continue to see a positive trend, the number of reported shipping incidents (2,815) increased by 5% year-on-year, driven by machinery damage, which caused over one in three incidents (1,044). A rise in incidents in the waters of the British Isles, North Sea, English Channel and Bay of Biscay (605), meant it replaced the East Mediterranean as the top hotspot for the first time since 2011, accounting for one in five incidents worldwide.

There were almost 200 reported fires on vessels over the past year, up 13%, with five total losses in 2019 alone. Misdeclared cargo is a major cause. Taking steps to address this issue is vital as it will only worsen as vessels become bigger and the range of goods transported grows. Chemicals and batteries are increasingly shipped in containers and pose a serious fire risk if they are misdeclared or wrongly stowed.

Meanwhile, events in the Gulf of Oman and the South China Sea show political rivalries are increasingly being played out on the high seas and shipping will continue to be drawn into geopolitical disputes. Heightened political risk and unrest globally has implications for shipping, such as the ability to secure crews and access ports safely. In addition, piracy remains a major threat with the Gulf of Guinea  reemerging as the global hotspot. Latin America is seeing armed robbery increase and there is renewed activity in the Singapore Strait.

Shipowners are also increasingly concerned about the prospect of cyber-conflicts. There has been a growing number of GPS spoofing attacks on ships, particularly in the Middle East and China, while there have been reports of a 400% increase in attempted cyber-attacks on the maritime sector since the coronavirus outbreak. 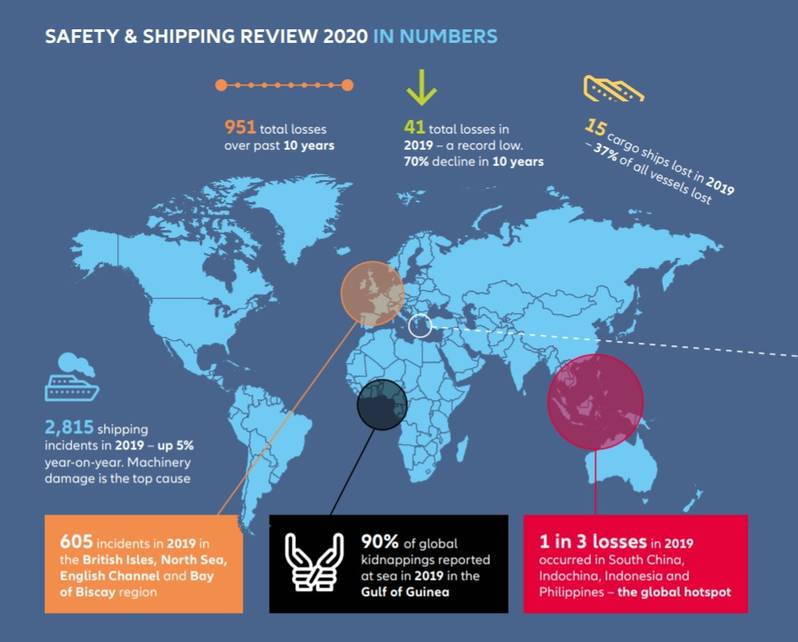