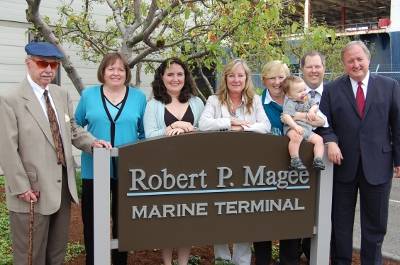 The Robert P. Magee Terminal dedication ceremony at Port of Tacoma was attended by about 150 industry and community leaders, extended family members, TOTE customers and employees who gathered to pay tribute to a man many described as visionary.
Scott Mason, President of ILWU Local 23, said in his remarks “I often wonder whether people can be trained as leaders or if they are just born with it, and I think Bob was just born with it.” He went on to say “The ILWU has an appreciation, and an admiration, for the man Bob Magee.”
After Bob’s death in November 2009, TOTE employees rallied around the idea of honoring Bob’s memory with a tribute. TOTE President John Parrott said ”The terminal was perfect because Bob loved Tacoma. He came out of the vessel department and so spent much of his time at our terminal. Even as the CEO of American Shipping group, TOTE’s parent company, you could always find Bob back down at the terminal on a random afternoon or the morning after a ship sailed.”
VP of Marine and Terminal Operations, Phil Morrell, remembered Bob’s frequent visits to the terminal and how he always made time to stop and talk with staff. “When he was at the terminal he was just Bob. He would play a hand of cribbage and was target of the same razzing if he played a bad hand in the game. No matter the title behind his name, he was always relaxed and at home.”
The Robert P. Magee Terminal name is proudly displayed on signs at each gated entrance to the terminal, as well as in front of the administration building at 500 Alexander Ave in Tacoma, WA.
About Bob Magee
Bob Magee began working for TOTE in May 1986 as Vice President of MarineOperations. Bob went on to become President and CEO of TOTE, later Chairman of Sea Star Line and then Chairman & CEO of American Shipping Group. Bob received numerous awards for maritime and community leadership which now reside in a custom-built display cabinet, welcoming employees and visitors in the lobby of the administration building at the Robert P. Magee Marine Terminal.
• Totem Ocean Trailer Express Inc. • American Shipping Group • Pierce County