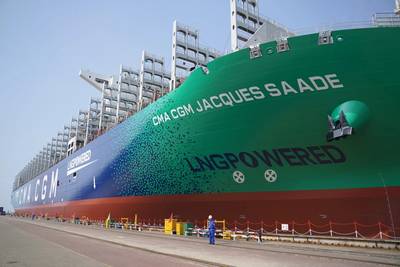 The world's largest containership to be powered by liquefied natural gas (LNG) has officially joined the fleet of French container shipping group CMA CGM, during a digital naming ceremony at CSSC’s shipyard in Shanghai.

Rodolphe Saadé, CMA CGM Group’s chairman and CEO, announced in November 2017 that the vessels would be equipped with LNG-powered engines, marking a world-first for ultra large container vessels as the shipping industry increasingly turns to the cleaner burning fuel to further its emissions reduction efforts.

LNG fuel, which enables a 99% reduction in sulfur dioxide and fine particle emissions and an 85% reduction in nitrogen dioxide emissions, is a key component of the CMA CGM Group's environmental ambitions. The group has previously outlined its objective to be carbon neutral by 2050.

“The CMA CGM Jacques Saadé embodies our commitment to the planet,” Saadé said. “This vessel has been enhanced with the latest technologies and is the result of seven years of research and development. While guaranteeing the safety of our crew, it preserves air quality and will be part of our fight against global warming. It significantly improves the environmental footprint of carried goods. We have taken a big step forward. We need to go further to build transport that is even more respectful of the environment.”

In addition to the LNG-burning engines, the nine ultra-large (400 meters long and 61 meters wide) box ships feature a redesigned straight bow with an integrated bulb, a redesigned rudder, and a redesigned propeller all of which substantially improve the vessels hydrodynamics, thereby reducing energy consumption.

The bridge boasts the latest embedded digital technologies to assist the commander and crew, in particular for port maneuvers. CMA CGM said the ships will deliver several world-first innovations to assist the captain and crew, including a tactical display offering enhanced map views for more dynamic navigation briefings; a path prediction system optimized to display the ship’s predicted position in the next three minutes; a smart eye system projecting a bird’s-eye view of the ship’s surrounding area; and augmented reality screens offering the crew precise information on the ship's rate of rotation, distance from the wharf and transverse speeds. Schneider Electric designed the vessel’s electrical switchboards, and Sperry Marine was responsible for radio navigation and platform equipment.

The CMA CGM Jacques Saadé will start its maiden voyage as of September 23 on CMA CGM Group’s French Asia Line (FAL) between Asia and Northern Europe. Its rotation will lead it to the ports of Pusan in South Korea; Tianjin, Ningbo, Shanghai and Yantian, China; Singapore; Southampton, Dunkirk, Hamburg, Rotterdam, Algeciras in Europe; and Port Kelang in Malaysia. This line provides a weekly service comprising 13 calls over the course of 84 days.

The nine Bureau Veritas-classed vessels will be registered at the French International Register (FIR). They will bear the names of landmark Parisian monuments and other renowned venues and institutions from throughout the French capital: Champs Elysées, Palais Royal, Louvre, Rivoli, Montmartre, Concorde, Trocadéro and Sorbonne.

CMA CGM has chosen Total to supply the LNG fuel. 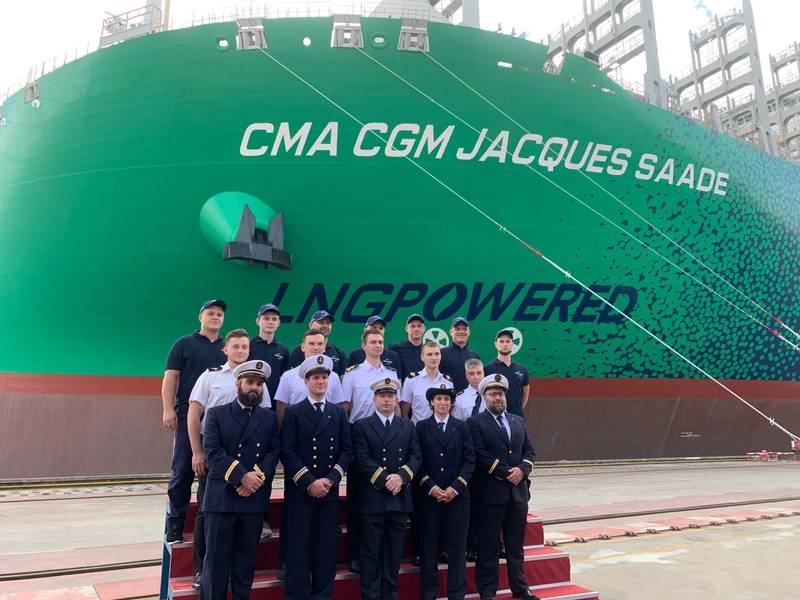 US Import Boom is Delaying Cargo at Nation's Busiest Port